Deri Protocol was founded with the objective of creating a tool that allowed for real DeFi, derivative trending, composability, and openness in the blockchain ecosystem.

Derivatives are one of the hottest types of contracts in traditional fand crypto markets due to the level of abstraction they allow investors by mimicking the performance of underlying assets.

This characteristic of derivatives has made them extremely popular in the crypto ecosystem as it expands the use of tokens from being native to a network to allow the trading of traditional assets on the blockchain.

While centralized exchanges (CEX) offering crypto trading services have implemented features intended to facilitate the exchange of risk exposures but they are unable to directly interact with on-chain activities and platforms, as they are no part of the networks themselves. 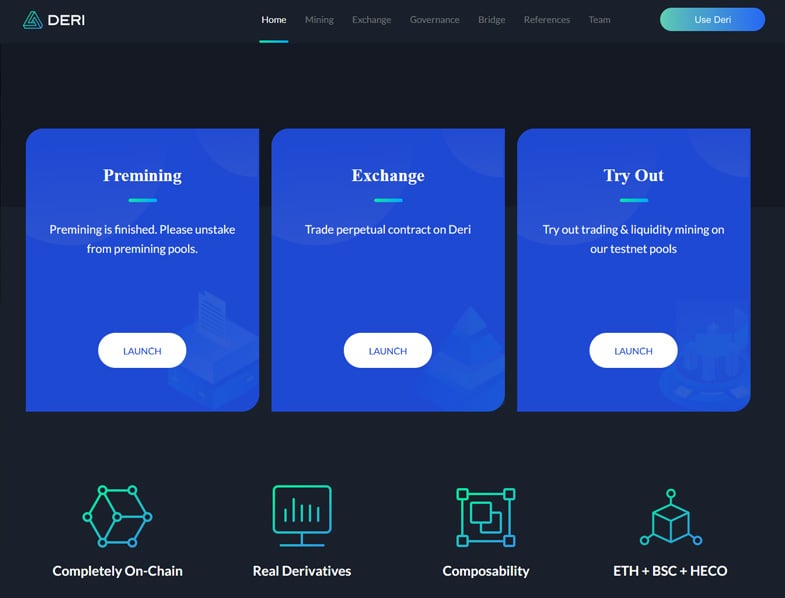 By creating a derivatives trading protocol innate to the blockchain, the exchange of risk exposure could be taken to a new level that allows for seamless integration with other blockchain platforms and networks.

The evolution of Decentralized Finance (DeFi) sector is happening, and Deri Protocol is helping to shape its future.

What is Deri Protocol?

Deri is a decentralized derivative exchange protocol that allows its users to exchange risk exposures with a high degree of precision and capital-efficiency by tokenizing risk exposures into Non-fungible Tokens (NFTs).

These NFTs can be easily imported into other decentralized finance (DeFi) projects, creating a whole new myriad of use cases and investment strategies catered to the specific needs of every investor.

Deri Protocol runs in the Ethereum Blockchain as a group of smart contracts that allows the exchange of risk exposure entirely on-chain, while also using oracles to ensure precision in the values.

The use of the Ethereum network grants the protocol immediate access to the biggest DeFi ecosystem and allows the minting of ERC-20 tokens to tokenize positions which can then be used in it.

How Does Deri Protocol Work?

Deri protocol operates in a way similar to popular Decentralized Exchanges (DEXs) like Uniswap. Deri uses pools to play the role of the counterparty of derivatives, operating as a dealer that is entirely automated by using smart contracts, allowing trustless operations to take place efficiently.

Once a user takes a position on the of these pools, a position and liquidity token are minted to represent the position of both parties involved in the trade. This token can then be used as any other digital asset by its holder, for example trading his position with another party. 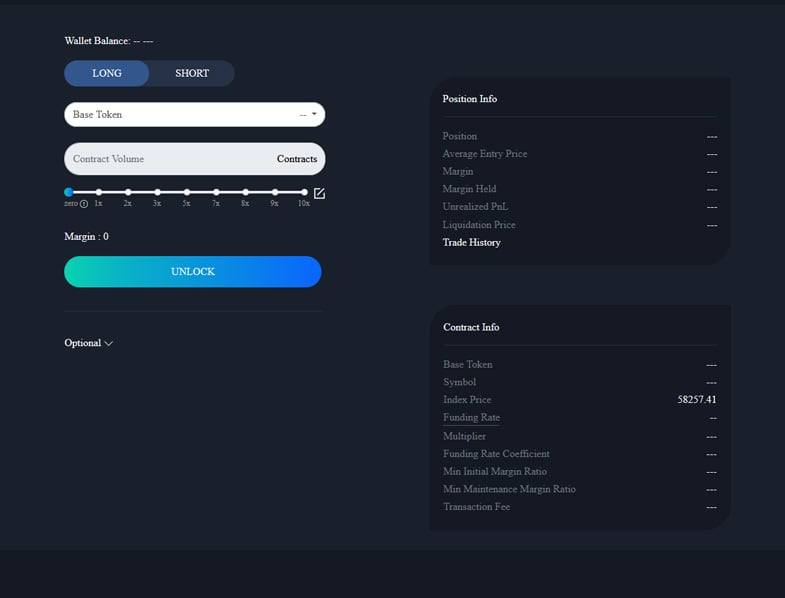 The underlier’s mark price of all liquidity pools is automatically updated by the protocol’s oracle, which takes the information from off or on-chain sources depending on the derivative, making a call every time an operation takes place.

The Tokens Powering the Protocol

Deri protocol makes use of position Tokens and liquidity tokens to represent every position that takes place in the network. These tokens are non-fungible, which means all of them are differentiable from one another and unique to the holder, who can use it to liquidate/adjust the position or trade it with a third party.

When a position is liquidated, which can be done when the marked price breaches the liquidating price, the token executes its liquidation function once the liquidator pays the gas costs, with the position’s remaining margin then being rewarded and the token burned.

In addition to these NFTs, the Deri protocol also has a native token by the name of DERI. This token is used on the governance of the protocol to allow its holders to participate in the decision-making process.

A total supply of 1 billion DERI will be in circulation, with 60% of it being minted through liquidity mining and the remaining 40% being awarded to the developer team, investors, and the Deri foundation, locking it in a vesting plan that will see its linear release over 2 years.

How To Buy DERI in SushiSwap

SushiSwap is one of the most popular decentralized exchanges in the crypto space at this time, which can now be used by investors to acquired DERI using different trading pairs.

To buy the token, users will need to visit the indicated page in the DEX, click on trade, connect their wallet using any of the options supported by the platform, decide how much DERI they want to acquire and which token they would like to use to pay, and then complete the trade.

The newly acquired DERI will automatically be placed in the user’s wallet and can then be used as a fee token, like any other cryptocurrency, as well as to participate in the governance protocol to decide its future.

Liquidity farming allows Deri Protocol’s users to mint DERI governance tokens as a reward for providing liquidity in the form of base tokens to the pools, ensuring the functionality of the platform.

Liquidity provides will gain yield in 2 different ways for participating in such a way: One in the form of base token profit and the DERI reward.

Base token profits will depend on transaction fees, position remaining value after the liquidation, funding fees, derivative performance, and other factors, which makes it variable and not always obtainable. 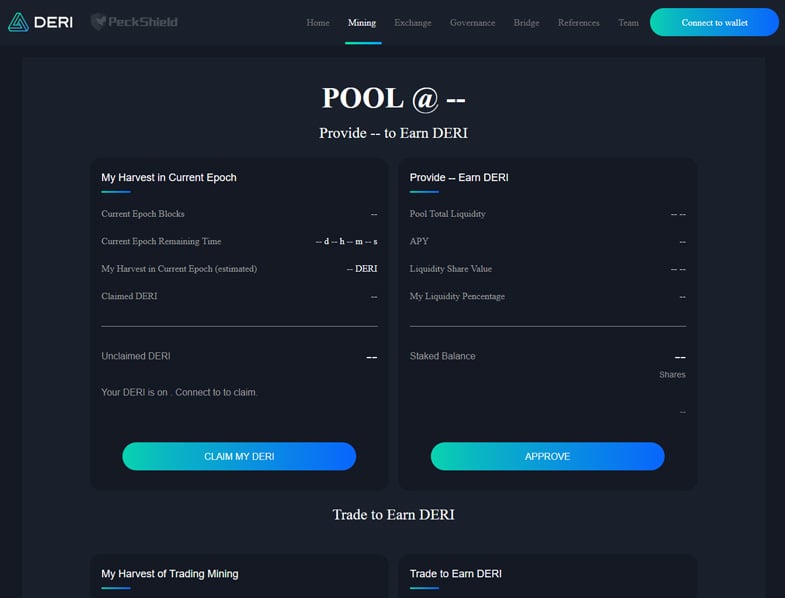 To ensure the security and stability of the protocol, Deri’s smart contracts have been audited by PeckShield, a firm specialized in blockchain security. The company didn’t found any critical vulnerabilities or issues with the protocol, with the medium to minor incidents being quickly fixed by the development team.

The Links on the Chain

With the cryptocurrency space continuing to grow by the day as new projects emerge to fulfill the needs of crypto enthusiasts, new projects require the support of investors and partners to have a real impact on the market.

As so, Deri protocol has partnered with other blockchain projects to improve the efficiency of the platform and collaborate with each other. These 3 firms are heavily centered around DeFi and include Basis, dForce, and Autofarm.

The project also has the support of multiple investment funds such as FBG Capital, Bixin Ventures, Lotus Capital, and Black range, all of them with years of experience in the industry.

Deri Protocol is aiming to revolutionize the way that derivatives can be used in the cryptocurrency ecosystem by improving interoperability and automation, something of increasing importance at a time when more networks and protocols are gaining traction.

The upcoming changes to the Ethereum network that will come with Etherum 2.0 will also further enhance the scalability of the network while attracting more investors that will certainly benefit from a platform specifically designed for the trading of derivatives.

By taking advantage of the benefits of NFTs and applying them to derivative trading, Deri protocol could easily be integrated into other projects in the DeFi industry, which is expected to continue growing in coming years as crypto adoption is on the rise.

The post What is Deri Protocol? DeFi Platform to Trade Derivatives appeared first on Blockonomi.