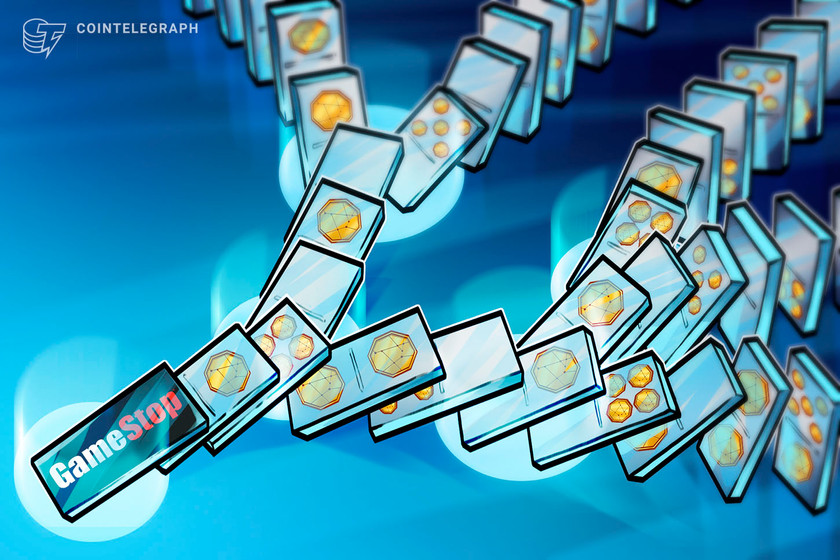 Though seemingly coming from nowhere for many, the themes behind the Reddit-fueled r/Wallstreetbets pump of GameStop feel familiar. Watching it unfold, I tried to figure out just why it had captured my interest to such a degree, and, to me, it was a spillover into the traditional markets of some pervasive themes driving crypto.

Despite some competition in the narrative, I view the motivating force — and by it, I mean the social media-fueled spread of the message that drew enough widespread interest to have an impact in the market — behind the GME pump as analogous with what, at one point, was an impetus behind Bitcoin (BTC). It is a driver for (depending on your level of cynicism) the crypto markets more broadly and the decentralized finance movement — a desire for the “democratization of finance.” Behind that movement is the view that finance and financial products should be open-sourced, accessible to all, as opposed to hinging on whether you are an accredited (read: high-net-worth) or an institutional player.

Related: Time to shine? Crypto should be given a chance after GameStop drama

Accredited investor rules, long the subject of critique, were recently expanded in 2020. Far short of a revolution, the amendment allowed additional classes of investors with certain financial credentials, like a Series 7 and knowledgeable employees of PE funds, to meet the definition among other changes that did not amount to anything meaningful. See the Securities and Exchange Commission’s press release describing the recent amendments to the definition.

There was a folkloric element to the narrative, a David and Goliath tale of sorts, where the everyday man was able to pull off a coup in inspiring a sizable crowdfunded movement in the market. Yet, while it evoked some degree of euphoria, the episode also brings to the forefront some of the simmering underlying tensions in U.S. society, including a strong sense of paternalism toward the poor, in this case, the retail investor, and mounting generational tensions.

Related: GameStop saga reveals legacy finance is rigged, and DeFi is the answer

In the United States, as a somewhat toxic offshoot of self-determination, there is the underlying bias or presupposition that those who are wealthy became so because of their personal attributes and, likewise, those who are poor will remain poor as a result of some personal failing on their part. Outside the academic setting, policy toward retail hasn’t reflected much exploration into the social and economic factors that allow people to accumulate wealth and the feeling that “the game is rigged” through increasing barriers to achieving upward mobility in the United States.

This manifests itself in regulatory paternalism, the government imposing limitations on who it deems able to afford to make investments or has access to certain financial products. Most visibly, this has left those who are non-accredited without access to early-stage investments. Many have argued that the wealth test systematically disenfranchises any and all investors capable of understanding risk despite their income level, making an argument that I agree with, that “being wealthy is no proxy for financial sophistication.”

But at the same time, this allows access to casinos and lottery tickets, payday loans and other predatory financial instruments, such as reverse mortgages, presumably where a competing interest, such as state budgetary shortfalls or effective lobbying on the part of industry, won out.

What you end up with is a system that seems engineered to reinforce class-based barriers — where the wealthy get to shape law and dictate the narrative as well. This is most starkly evidenced by the Melvin Capital sympathetic content that ran on CNBC portraying the hedge funds as the protagonists, leveraging the dogmatic network-wide belief system that, somehow, Melvin’s actions were good for society and universally just.

This was juxtaposed against a characterization of the Redditors as huddled, unwashed masses who, through chaos and destruction, embarked like lemmings on a path toward personal financial ruin and created a situation where there was some sort of systemic risk created by touting a random low volume stock. Not to put too fine a point on it, but while rich people lost some money here, among others, it is not exactly the financial apocalypse it was portrayed to be.

To me, putting aside the unending joy of having mainstream finance publications quote Reddit netizens like u/DadBod39 and prompting untold memes around Robinhood changing its name to Prince John’s Trading or RobingtheHood, this episode in the stock market captured my attention by highlighting the above-described tension, as well as a generational shift to social-media-based messaging, where the internet can be leveraged widely to produce decentralized market forces.

Fueled by (semi)-anonymous decentralized actors, this episode brings forward one of my core fascinations with crypto: the prospect of a paradigm shift that challenges existing regulations. Much like the regulatory challenges applicable to decentralized finance, how do you address a movement of the masses when law presupposes there is a central figure with more culpability than Keith Gill, to which you can attach liability? Addressing this poses a conundrum, as regulators are increasingly faced with cutting heads off hydras with the prospect of more growing back.

Most recently, the House Committee on Financial Services had a post-mortem hearing on GameStop and the surrounding market volatility, and while I always go into these with the lowest of expectations, I come out each time with a sense of renewed nihilism and hopelessness. While the recent House hearing on Feb. 18, 2021, provided an opportunity for a rehashing of the r/Wallstreetbets pump from those with a first-row view of the events that transpired and gave legislators the opportunity to saber rattle and virtue signal to their respective constituents, there were no clear signs of a path forward.

There was a cursory discussion of the merits of reducing settlement time (and yes, blockchain), the downsides of relying on high-growth fintech startups to provide market infrastructure type services, and the balancing act, as Sean Casten put it, of trying to democratize finance while not “being a conduit to feed fish to sharks.”

It was also an opportunity for legislators to play “who can be the most tone-deaf to the underlying market incentives” that fuel today’s ad tech and surveillance-driven economy, questioning whether this was indeed a free service for consumers — in this case, retail investors (breaking news, it isn’t) while remaining a for-profit institution. One House member asked if Robinhood would stop the practice of earning revenue by allowing Citadel to “pay for order flow” and allowing for the institutional players to front-run retail, pointing out that the practices that Robinhood engages in are legal, with disclosure, and certainly not unique, and are used by Fidelity, E-Trade, Charles Schwab and TD Ameritrade, among others, according to SEC Rule 606 disclosures. The answer was clearly and universally no, or, as Casten, cited earlier, put it: “There is a tension in [Robinhood’s] business model.”

This is the same legislature that has stalled in an attempt to stem consumer data from being bought and sold as a business model, thereby achieving peak-level hypocrisy in the triple threat of: (1) allowing the monetization of violations of privacy and somehow both; (2) blaming free-market actors for making money off acts that are legal; and (3) also suggesting at times that regulation was the cause of the harm that was done.

In a particularly depressing segment of the hearing, Robinhood was all at once villainized for not providing the committee with disclosure forms that are publicly available; for not foreseeing a tenfold spike in the capital it would need; and for taking emergency steps to meet capital requirements, which involved some degree of discretion in how to address but not as much as House members insinuated.

Others suggested that Robinhood should be responsible for the relative gains in its users’ portfolios, and still, others decried that there were capital requirements for Robinhood in the first place, suggesting that regulations were the root cause of the capital crunch. Altogether, the hearing left no discernable path forward except that we should expect more hearings.

In all, the fallout continues, with a couple of indications that there is certainly more to come. Maxine Waters has stated that regulators will be present to testify at additional hearings of the House Financial Services Committee, and class actions have been filed naming Keith Gill.

I view this as likely a beginning rather than a one-off, where we can look forward to additional skirmishes breaking out with increasing frequency as well as corresponding pressure on regulators to address them. Though I am not hopeful there will be any more movement in the accredited investor definition, maybe it is an opportunity for market regulators to reexamine underlying regulatory bias, as this has shone a spotlight on the need to create new opportunities for younger generations to build wealth.

This article does not contain investment advice or recommendations. Every investment and trading move involves risk, and readers should conduct their own research when making a decision.

The views, thoughts and opinions expressed here are the author’s alone and do not necessarily reflect or represent the views and opinions of Cointelegraph.

Sarah H. Brennan is counsel and leader of the digital assets and disruptive technologies practice at Harter Secrest & Emery LLP. Sarah has a broad range of experience in corporate and transactional matters. She focuses primarily on corporate and securities law, representing public and private companies, venture capital and private equity firms, investors, and clients in every stage of the corporate life cycle.