What would you think if someone today created a new cryptocurrency, and it was very obvious from the start that it was intended to be satirical? A lot of people probably wouldn’t even give it a second thought. That was certainly the case when Bitcoin Clashic hit the scene last year. But when it comes to Dogecoin, the Internet embraced it.

Even today it’s still a widely used, traded, and community supported cryptocurrency. It’s available on almost every exchange, and is supported by a number of popular multi-asset wallets.

So read on as we go over more about the history, present, and future of this silly yet highly effective cryptocurrency.

Created back in December 2013 by creators Billy Markus and Jackson Palmer, the currency was originally intended for two main purposes. Arguably, the primary purpose of Dogecoin was to act as a satirical commentary on the sudden explosion and ridiculous valuations of the new currencies coming out at that time.

Back in 2013, all sorts of random and debatably pointless cryptocurrencies were created and had million-dollar market caps after just a few days online. One of those was “BBQ Coin“, which at one point had a market cap of nearly $8 million, and is now effectively worth nothing.

The second goal was to create a currency that was fun and more readily accessible than the dominant bitcoin. Dogecoin was also designed to have a very large supply in the hundreds of billions so that each individual unit would always have a low price. Other intentions for the currency were to be used as an online tipping currency, such as for Reddit comments or YouTube videos, among other things.

The creators of Dogecoin used the popular Doge meme as the name and symbol for the new cryptocurrency. Word of the currency spread quickly through the Internet thanks to an innovative guerrilla marketing campaign using the characteristics of the Doge meme. This usually involved a picture of the Doge character alongside various broken English sentences that often took the structure of “much something”, “very something”, “such something”, “wow”. For example, “such crypto, many coin, very currency, wow” or something like it. 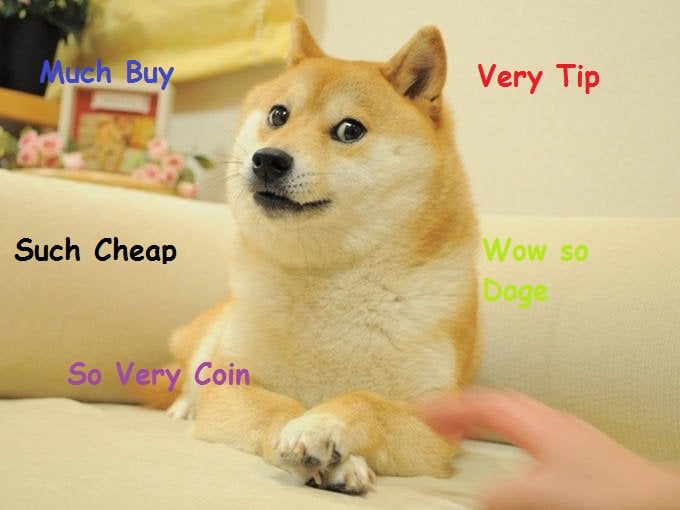 Dogecoin was created as a fork of Luckycoin, which itself was a fork of Litecoin. Therefore, Dogecoin contains a number of characteristics that are similar to Litecoin but not identical. For example, it uses the Scrypt algorithm which was originally designed so that bitcoin ASICs could not mine it. Of course, Scrypt ASIC miners exist today, but that was not the case back in 2013. Dogecoin also has a shorter block time than Litecoin.

Dogecoin was designed to have a very large supply, for the express purpose of keeping the currency accessible.

As a result of the low cost of the individual tokens, transaction fees are also significantly lower than other competitors. Typically less than one cent or so is all that it takes to send a transaction. Further, Dogecoin transactions are very fast and confirm quickly.

Dogecoin has recently seen a fast rise in price, as of Feb 2021 it trades for around 3cents, it did hit as high as 7cents after a huge pump in price after going viral on TikTok, Twitter and other social media sites.

What are people using it for?

Dogecoin is interesting because although it was meant to be satirical and just for fun, it has become an important mainstay in the cryptocurrency world. Due to its incredibly low transaction fees and fast transaction times, as well as relatively stable value, some traders are using it as a means of exchange.

For example, if someone wants to withdraw money from a cryptocurrency exchange, it may be very expensive to do so if the currency is in bitcoin. Therefore, some traders may choose to first trade their bitcoin for Dogecoin and then withdraw their currency as Dogecoin before later converting again into something else.

Some use it purely for speculation since the price of each unit is so low. It’s possible to purchase many millions of units without spending a fortune, and any small price increase can lead to reasonable market gains.

Dogecoin is also very widely accepted at almost every major exchange as well as several instant exchange services such as Shapeshift and Flyp.me. Because Dogecoin is integrated into Shapeshift, it can be used to pay for a wide variety of services and goods that have the Shapeshift API built-in.

The future of Dogecoin

Dogecoin has fallen on hard times more than once in its history. A highly divisive incident involving a cryptocurrency exchange followed by a massive theft resulted in many Dogecoin fans becoming disaffected, and abandoning the currency.

As well, Dogecoin was removed from the Exodus wallet because Exodus claimed Dogecoin is not being developed and lacks several important updates.

“Although we love the Dogecoin community…the development seems to have gone stale with not many updates to key components we need. The last release of Dogecoin core was in Nov of 2015. Unfortunately Exodus is built on support from public Insight servers and Dogecoin does not have the latest updates to Insight. We have asked around and it does not seem this is going to happen anytime soon.”

But what Dogecoin has going forward, however, outweighs its downsides. It is still accomplishing the original goals that it was set out to accomplish back in 2013. It is still a low-cost, easy to acquire, friendly and welcoming cryptocurrency. The Dogecoin community is especially quite famous for its friendliness and willingness to help new users. Dogecoin supporters are often seen giving out small amounts of the currency in order to encourage others to adopt it and understand it.

While the Doge meme may be all but forgotten for many, for the true believers, it is still a wide-reaching and effective symbol that unites the masses under a unified banner of solidarity. As waves of new users join cryptocurrency every day, many of them will inevitably use Dogecoin to get started, and of those, some will certainly stay and support the community and the currency for the foreseeable future.

Where to Buy Dogecoin?

The post What is Dogecoin? Complete Beginner’s Guide appeared first on Blockonomi.